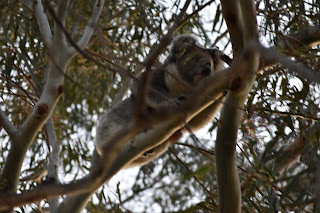 The street we live in, and the surrounding streets are pretty well treed, but on the whole they're deciduous non-native trees, but in our yard we have a big gum tree, like an island of Australianess surrounded by all these alien interlopers.

Thursday evening, after he'd been fed, the cat went out for his usual foray. A few minutes later I went out to water some plants we have in pots and close up the coldframe for the night, and I noticed the cat was staring hard, really hard, at the gum.

I followed his gaze, and there it was, a koala sitting in the tree feeding.

We took some photos, watched the koala for a bit and then brought the cat inside to let the koala make his or her escape in peace.

Koalas are not that unusual in Beechworth. Shortly after we moved here there was one in plain day sitting in one of the ornamental street trees outside of the old post office, and a year or so ago I had to perform an emergency stop going down the hill to put in one of my volunteer days documenting artefacts for Dow's Pharmacy, when a koala came out of the bush next the road and proceeded to amble across the road in front of my car.

I am guessing that the Beechworth Historic park - basically the area of old gold diggings that surrounds the town, and which has now gone back to scrubby native bush, has provided a refuge for the local koala population ...
Posted by dgm at 09:40