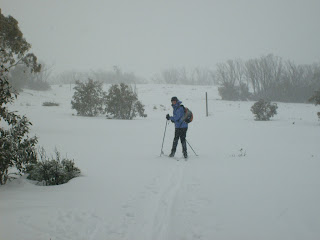 This year has not been a particularly good snow year, with decent cover coming late - as we saw with our trip to Kiandra at the end of June. The snow didn't really appear for another month and then the usual mix of colds flu and work meant we couldn't get out for a bit of cross country ski-ing.

Well, yesterday the stars aligned and we managed to get out - and it was truly horrible.

We woke up to a clear Canberra morning after overnight sleety rain, checked the weather and ski reports, and while there was bad weather coming it didn't look that bad. We'd originally planned to go to Perisher but at the last minute changed to Selwyn near Kiandra as it was a bit more sheltered and while they had had sleety rain that morning the forecast said it should clear by mid day.

It didn't clear - it got worse. Unbeknownst to us there was a severe cold front coming through and dumping snow on the Victorian side of the Alps. Driving up through Cooma in cold but brilliant sunshine we could see the weather clustering around the Alps with sleet and snow falling - but having checked the weather that morning we thought that was probably the end of it and it would start to clear back from the Kiandra end. Driving through Adaminaby the wind began to blow with the town flagpole noticably bending and twisting in the wind and as we started up Connors Hill it began to sleet, turning to wet snow at the top, although it wasn't lying. Sawyer's Hill was much the same story and when we got to Kiandra it looked almost as if the snow was rained out with patches of grass showing, and the Eucumbene river was in flood.

We momentarily thought about giving up and turning round and cutting across to Perisher as we thought it didn't look as if there was much ski-ing to be had, but decided to press on. At Selwyn itself the snow looked ski-able and we decided to give it a go. The snow was coming down as small wet flakes at this stage but we reckoned we were well enough equipped.

Off we set towards Four Mile Hut along the trail. The track was covered in wet draggy snow but we were making reasonable progress but the snow was now coming down in wet sloppy flakes the size of 10c coins. About half way there as we were coming out of shelter under the trees we realised it wasn't going to clear and while we were warm enough in our ski gear our packs were getting seriously wet and it was only a matter of time before the wet started seeping through gloves and boots.

So we turned tail and ski-id back down to Selwyn, with our vision getting steadily more obscured by the heavier and heavier falling snow. And all the time the skis were getting draggier and draggier in the wet snow, making the experience less and less enjoyable.

When we got back to the car there was already about four or five centimetres of snow on it so it was gear in the back and skis on the roof as quickly as possible.

Rather than sit and have a thermos of coffee we decided to follow the National Parks snowplough down to the park gates before the road got too wet and slippy. Driving down we had to zigzag around a ute that had spun and ended up in the ditch partly blocking the road. The police were there and everyone looked to be alright so we kept on heading down.

Things were no better when we got down to the Snowy Mountains highway, so we decided to carry on down the hill joining a line of three or four cars behind another snowplough. Left to itself the road would have been covered but there was enough traffic (just) to keep it slushy.

The snowplough stopped at the bottom of Connor's hill and from then on the sleet increasingly diminished and the road cleared so that while it was cold and spitting it was basically clear by the time we got to Adaminaby, where we retreated to the cafe for a pie, coffee and a shared danish.

We must of looked cold and weatherbeaten as the lady serving suggested we should sit by the fire. After that it was back to the car, which was still partly covered with now melting snow and surrounded by a fascinated excited group of Indian children, who'd clearly never seen such a thing.

The rest of the journey back was uneventful apart from the occasional sleet flurry. It looked as if we might get some snow on the Brindabellas out of the weather, but there was none visible on the mountains this morning as I drove to work.
Posted by dgm at 11:10