Well this week saw what is officially the first day of summer (01 December) in Australia. We've marked it by a week of near continual rain (around 20mm's worth most days) and culminating in a storm yesterday that dumped around 80mm on parts of the city in a couple of hours.

Not surprisingly, not a lot has happened on the deck.

So instead here's a picture of Sullivan's creek this morning: 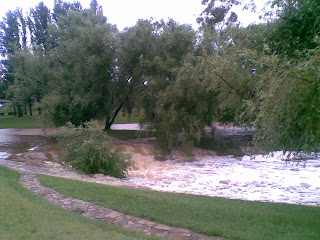 Now for those of you who don't know the ANU campus, Sullivan's creek is a gentle meandering willow fringed stream with bridges and stepping stones, the idea being to provide a green strip through campus where students can picnic, read books, lie on the grass, surf the internet and do the other things that are a part of undergraduate life.

Not today. As you can see the stepping stones have disappeared under a raging torrent of muddy brown water, and even the swans that normally bob about have retreated to the reeds for a disconsolate peck or two ...
Posted by dgm at 09:35