I've been working in the garden recently digging out a new garden bed where the old washing line was.

And it's quite interesting - there's a layer of thick claggy brown clayey soil about 30cm thick overlaying the original orange clay and sandstone that you get around here. Soil takes sometime to build up and having 30cm suggests that it had some help along the way - either some active composting to build up the soil, or else at sometime someone brought in a load of soil from somewhere.

Our house is supposed to be around a 120 years old, and before then the land was reputed to be an orchard, and that does seem to fit - when we were building our extension we found an old cast iron federation sewer pipe, and I've found a horseshoe and some old rusty bits of agricultural tools. 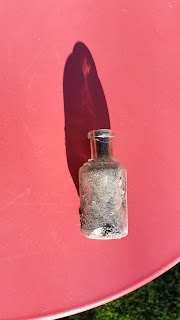 which from my work for the National trust I would guess to be late nineteenth/early twentieth century.

However I havn't found anything datable as yet. I had a moment of excitement when I turned up a coin yesterday, but cleaning it off it turned out to be a 1984 dollar rather than anything predecimal or even earlier.

I guess basically I need to keep looking in case I turn up anything datable, plus perhaps a land registry search to find out when there was first a house on our block ....
Posted by dgm at 17:36