It's been unseasonably hot and dry.

We normally get a dry autumn, and it's not been that bad - 60 or so millimetres of rain since January, but on the other hand it's 9 days into April and it's still thirty degrees outside this afternoon.

Despite the hot weather, I've started remodelling the front garden area after the mess the builders left, not to mention the chaos caused by the guys who laid the new driveway, and I've even found and planted some Siberian dogwood (Westonbirt dogwood) tube stock.

When they grow, we should get nice red canes in winter once the leaves are off them. which should make a pretty show. We last had some of these in England, and I've been looking for some ever since we moved to Fadden. They should hopefully do well.

And because it's chestnut time I've had a constant accompaniment of white cockatoos and king parrots feasting on the nuts (and squabbling as to who was there first).

This afternoon, however, the tree was occupied by a pair of parrots I didn't recognise 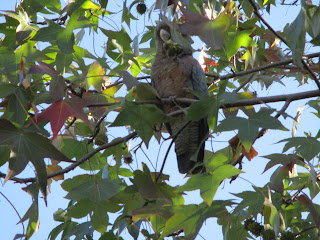 it turned out to be a pair of Bourke's parrots, a common enough arid zone parrot, but one that only moves south and east when things are hard out west on the edge of the desert, which I guess they must be just now.

Glad that the chestnut tree is providing a bit of relief for them ....