Back at the end of March I posted about our storm preparedness (or lack thereof).

Well, it was a good thing we had a dry (?) run in March because we had an absolute humdinger of a storm on Thursday night. 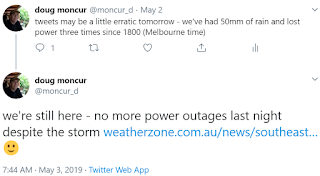 It started with spectacular sheet lightning to the south of us, lighting up the evening sky like in old film of bombardments on the western front in World War I, and with great rumbling peals of thunder, which was  followed by torrential rain - what I describe as being like God flushing the toilet, so massive was the downpour and the speed of its onset.

This happened at around half past six. after the sun had gone down, and when we getting dinner ready, an Italian style chicken stew.

We were doing normal thinks, cooking, half listening to the evening news on the tv, and enjoyimg a welcome glass of pinot noir - we'd been out all day in Albury -our nearest approximation to a city - dashing to dentists (cancelled at the last minute), getting flu shots, picking up stuff ordered via click and collect, and a host of other tasks. All in all a pretty normal weekday evening.

And then the lights went out, came back on, and went out again. And stayed out. Leaving us in a very dark house.

Fortunately we always leave a torch on the kitchen bench, so we flipped into our storm routine:

All the time the storm was battering down.

I was a little worried by the ferocity of the storm as we've had  problems with an intermittent leak - really just a very slight drip - in the roof when we get heavy rain, but this time, mercifully, no leak.

Given the power company's time to fix of several hours we finished cooking our stew on the camping stove, and sat and talked.

About half past eight the power came back for about ten minutes, went off, came back, and went off again, and then just before ten it came back, and this time it stayed on.

We waited about half an hour, guessed that the power was staying on, put the dishwasher on, and went to bed, being careful to take camping head torches with us just in case we woke up to a dark, silent house.

In the event we needn't have worried. The power stayed on all night. The rain finally stopped about four in the morning.

Daylight brought a wet and soggy morning, leaves stripped from the trees, but no real damage, except to my Asian green seedlings in their cold frame - the wind had got in and flipped it open, and the rain had flooded the seed trays, but enough seem to have survived that the loss was annoying, nothing more.

On the way down to Chiltern to my documentation project  I half expected the road to be flooded, or blocked by downed trees, but no, while there had been a bit of flooding the road was more or less clear, and while there were branches lying about you could get through without difficulty - I'm guessing the roads people had been round at first light to do a preliminary clean up, unblock flooded culverts and so on.

Being prepared meant that something that was a bit of drama, never got close to being a crisis ...
Posted by dgm at 15:16