You may remember that back in October, before the fires and floods, we had a trip to Canberra which we rounded off with a couple of days on the NSW south coast.

Well it's a place we have a great affection for - we almost moved there after we retired - and after our couple of days in October, we decided we'd have a few days in Bermagui at the end of summer.

We booked an AirBnB back in December, before the fires and smoke. After the worst was over the owner contacted us to ask if we wanted to cancel, but we said no, Bermagui's untouched as is Mimosa Rocks national park, and people probably need the tourists back, so we're still coming.

The Snowy Mountain highway is open all the way, although there's still roadworks and tree clearance going on.

Encouragingly, in a few places the trees that survived have started to sprout again 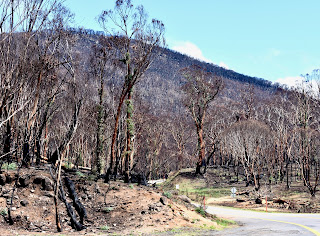 but elsewhere things are pretty devastated - for example at Sawyers hill there was a stand of old dead mountain ash trees that had burned in 2003 - they're all gone as is all the regrowth.

At the old gold town of Kiandra all the old preserved wooden cottages have burned down to the stumps with only the chimney stacks left, and the old stone built courthouse building is a shell 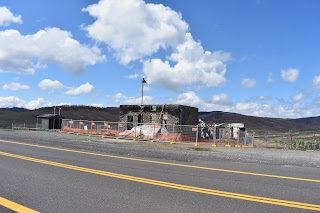 Driving down to the coast through bushfire affected areas it was odd, some houses had survived while another on the next block had gone. I found it all rather disquieting, just as when in 2015, when driving across Croatia, we went through a little town called Latin, which looked nice clean and prosperous, made a left turn and found ourselves driving down a street of burned out abandoned houses left over from the Yugoslav wars.

Bermagui was its old self. Our favourite Italian restaurant was still in business, we had fish and chips from the fishermen's co-op a couple of times.

The only problem was that our visit coincided with two and a half days of really heavy drenching rain - it's not a temperate rainforest are for nothing - which restricted our activites a bit.

One day we just gave up, read books, and drank tea. Other days we went for a drive, went to Tilba and Merimbula - actually down to Eden. One day it was decent enough to let us have a reasonable coastal walk at Camel Rock, and on our last afternoon the rain cleared and we manged a walk along the beach at Aragunnu in the Mimosa Rocks national park.

Even though the park was undamaged, we could still see evidence of the fires with there being ash in ocean - I guess the heavy rain had washed more ash into the creeks, which in turn had ended up in the ocean.

Still, it was a relaxing few days. While we tried to buy local and eat local the rain frustrated us a bit. We'd planned a trip to the farmers market and to the sculpture by the sea exhibition - but we didn't, it was just too bloody wet.

Mind you, we should have known - when I look back at our trip to Bermagui in 2012, it was just as wet, but we had just as good a time.

The Friday evening before we were due to go back, we had a puncture. This was more than a drama than it should have been, as while we had one of these silly space saver spares and a jack, we didn't have a wrench - it had obviously gone missing at some point, possibly before we owned the car, and we had to rather embarrassingly call the NRMA out.

Now, no one wants to drive any longer than they have to on a space saver tyre, so while I was waiting I looked up tyre shops, and the TyrePower store in Bega - some 60km away - was open on Saturday morning, so I called them and explained our problem and said we'd be there about nine.

Optimistic - it was more like nine thirty, but they were really good and helpful, and did the tyre swap immediately. Definitely recommended.

Even so it was going to take them forty minutes to put the car on the hoist - swap the tyres - the joy of all wheel drives meaning both tyres on the same axle need to match, so replacing one means replacing two - and put everything back together.

Well we'd only had toast for breakfast, so we went for a walk to look for coffee and a toasted sandwich.

Bega used to be a really dead country town. Not any more - a couple of really good little cafes, a decent independent bookshop, a wholefoods co-op and a few other funky shops, plus some really good bits of architecture like the old red cross building on Church Street 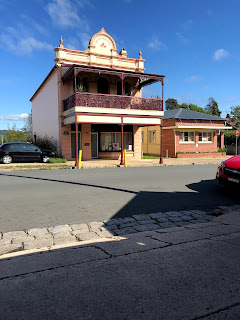 all in all a much more alive place than once was ...