We’ve had ourselves a little holiday.

Lockdown was easing allowing us to travel around the state, but not interstate which meant that our planned trip to Trial Bay in NSW was off, so we decided to go to Port Fairy, on the Shipwreck Coast for a few days.

Coincident with our trip was the easing of restrictions for Melbourne, meaning that people who had been locked down in the city were also being let out into regional Victoria from the Monday of our week away. Obviously a risk, but we reckoned that if there was to be an outbreak when they let people out, Port Fairy would be far enough away to be unaffected.

In the event everything went well with a string of doughnut days with no new cases being reported.

Not that our trip was without incident. On the way to Port Fairy, we’d decided to break our journey at Castlemaine and spend the Sunday in second hand bookshops and antique shops.

On our way to Castlemaine we stopped at Murchison, which has an excellent bakery, to get some takeaway sandwiches and coffees for lunch and sit in the park. Afterwards, I went to the loo in the public toilets.

Just as I was finishing doing what I was doing I heard a slithery sound and saw a brown snake slithering past me. Fortunately it was more afraid of me than I was of it, and having a clear run to the exit, rocketed off across the car park and into the grass beside the creek.

So on to Castlemaine, we had our first experience of eating out in lockdown, and having to register online at the restaurant, but we had an excellent pizza at Bella Fresca.

The next day was a bookshop and antique day. After being cooped up for so long, I found the whole thing a little overwhelming and probably didn’t buy as intelligently as I ordinarily would have done so, but we enjoyed being at Book Heaven, and the pleasure of rustling around the massive stock of books.

We didn’t do so well on the antiques front – we were looking for old housewares for our house, but we had a good time not finding anything.

Then on to Port Fairy where we had rented an AirBnB for a few days. It was an old nineteenth century cottage with a modern extension, and basically a similar floor plan to our house, except that more of the nineteenth century features had survived, even down to the pressed metal doorknobs! 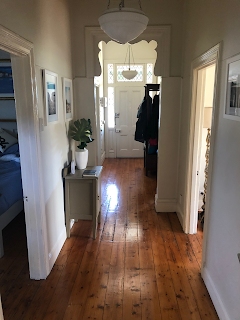 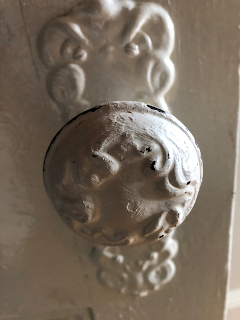 Our first full day was ridiculously hot, into the mid thirties. We hadn’t bought swimmers as the water is still freezing cold in November, so we paddled and beachcombed. That evening the weather changed and we were treated to a spectacular lightshow as a storm swept in across the day.

The next day was around twenty degrees cooler and it poured with rain, so we read, drank tea, and relaxed. 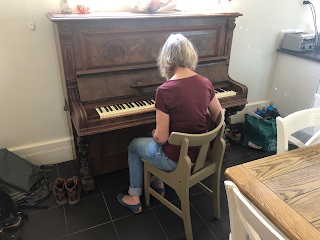 (and yes there was a piano, and even more it was more or less in tune!)

On the Thursday, while still cold and windy, we had a trip to Port Campbell and the Apostles, a group of sea stacks gradually eroding into the sea. 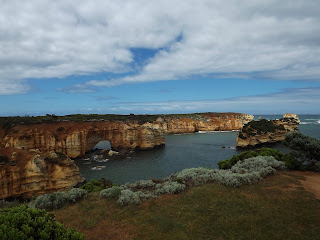 We were amazed at just quite how busy the National Park car park was with visitors, but quieter sites such as the Bay of Martyrs and Loch Ard were much less busy.

On our last day we went out to Cape Bridgewater and the Petrified Forest. 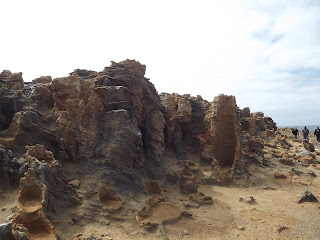 A friend of J’s from the local arts society who had been down at Port Fairy a couple of weeks earlier helping with the annual bird count, had said there had been whales in the bay, even though it was late in the season.

Needless to say we saw neither whales nor seals, just great lumps of storm ripped kelp floating in the sea, but we had a good blowy walk along the cape, through coastal scrub weirdly reminiscent of the far south west of Cornwall.

In fact we saw hardly anything in the way of wildlife, other than an echidna, and on an evening walk to Port Fairy lighthouse, where we saw a wallaby, with a joey in its pouch, that stopped an looked at us as if we were space aliens. Of course, by the time I'd got my phone out, she'd decided to hop off.

It was truly, truly good to get away, even if the weather was still playing spring games ...