A trip to the mid-North coast ..

Well, we’ve managed to have ourselves a little holiday.

Nothing flash, just a couple of days in Newcastle and a week at Green Point on the mid-north coast of NSW.

Why we went and why now is a story in itself.

Way back early 2020, after the bushfire smoke cleared, J had planned to go to a pastel artists workshop in Sydney, and I had planned to tag along to have an afternoon in the State Library checking on some defunct pharmaceutical companies in connection with the Dow’s pharmacy documentation project.

I even still have an email from early March 2020 confirming my application for a Library card languishing in the bottom of my inbox.

The date of course gives it away. A week or two later the pandemic struck, we were in lockdown, and the workshop was cancelled.

The organisers rescheduled the workshop for the end of February and again J signed up.

We of course then had the Christmas Covid-19 outbreak in Sydney, renewed border closures, to be quickly followed by a five day emergency lockdown in Victoria. We hung in there until the last possible date to cancel J’s place at the workshop, but it was not to be. We cancelled the workshop, and the hotel in Sydney.

On the back of our planned trip to Sydney, we’d booked an Airbnb holiday apartment at Green Point with the intention of catching the last of the summer warmth. It came with pretty generous cancellation terms which meant we could hang in there even after we’d cancelled J’s workshop.

Well, the stars finally aligned, and a week or so before it was clear we could go.

Green Point is a little too far to drive in a day from Beechworth, so we decided to stopover in Newcastle for a couple of days to let J go to a specialist arts supplies shop, do a little department store shopping for clothes – something we hadn’t been able to do for a year, which personally meant that my trousers can be split into two categories – tatty and very tatty.

We didn’t know Newcastle, but lucked out with an AirBnb on Cook’s Hill within walking distance of the restaurants on Darby Street, and could walk up over the hill to King Edward’s Park and the beach.

We did strike one snag though. We of course needed to install the ServicesNSW app on our phones to check in to restaurants via the QR code.

J had turned off TouchID on her phone because it kept getting confused by pastel dust and hand cleaner, and couldn’t remember her Apple password, and was unable to install the app, meaning that I had, much to her annoyance, add her as dependant each time we checked in somewhere.

Otherwise, everything was fine. We did our shopping, and one afternoon walked up to the old 1890’s fortifications on top of Shepherd’s Hill. Built initially on the back of a burst of anti Russian paranoia, they are now undergoing restoration. The actual emplacements are still very run down and tatty, but the Gunner’s Cottage looks (from the outside) to have been sensitively restored. 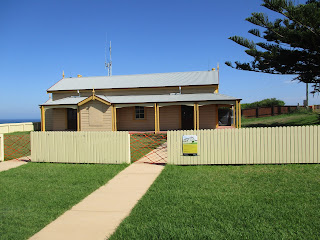 Then on to Green Point itself.

Basically, we had a holiday. Storms offshore had made the surf too rough to swim, even on Lizzie Beach, except for one day when we had a fairly rough swim, rough enough to make you feel alive, but not so rough as to make you doubt your mortality.

Other days we had a couple of good coastal bushwalks through unfamiliar subtropical vegetation, and a trip up to Ellenborough Falls on top of the Dividing Range. 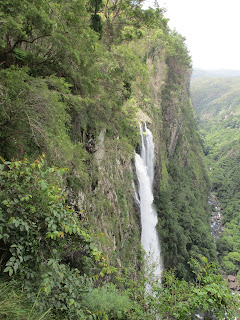 And then it was time to come home, just as we were getting into the swing of things, but equally bad weather had been forecast, so staying another few days might not have been much fun.

The idea was sound, but much of the scenery on the Putty Road was uninspiring and there were no decent picnic spots. In retrospect we’d have done better going via Merriwa and Mudgee.

I had a memory of stopping outside the old courthouse in Windsor on a wet Sunday in November twenty years ago and thinking it looked interesting and historic, and we’d half a plan to stop for a late lunch there.

Not a bit of it. Coming down the Putty Road took longer than we thought and it was the beginning of the afternoon school run when we got to Windsor, so we pressed on through Windsor and Richmond hoping that we would find a cafe that was still open.

We ended up buying a packet of potato chips at a petrol station and sharing them as we drove over the Blue Mountains to Lithgow.

However, what I did spot, while stuck in traffic behind a bus, was an interesting looking old graveyard with what looked to be some early nineteenth century sandstone gravestones, the sort of place you might pull up and have a look at, except of course there was nowhere to stop and we were trying to get to our motel in Orange. Some other time perhaps.

Orange was nice, looked nice, would repay a visit. We’d hoped to arrive early enough to have a quick look at the town centre, but it was nearly six when we got there, so we went straight to our motel and checked in.

The next day was another long drive across the west of New South Wales via Canownidra and Corowa to Jugiong on the freeway and home.

The countryside round Orange looked beautiful though in early Autumn and maybe one day, we’ll have a proper trip ...