A ride to Baarmutha station 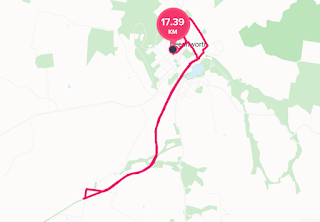 The consequence of the turn of the seasons is that the mornings are increasingly cold - 5C just before sunrise this morning - which means that while there is still enough light for an early morning bike ride it's beginning to get seriously cold.
So this afternoon I did something a little different - I rode along the bike path that follows the route of  the old railway line (closed in 1975) out past Beechworth station to Baarmutha station.

Beechworth station is still there and looks very much like it does in this picture from the State Library's collection showing the station before the tracks were lifted.
It's now a community hub and houses the local U3A branch.
Riding out of Beechworth one crosses Mellish street and then steadily climbs up past Pennyweight winery before dropping down through woodland to the wonderfully named Fighting Gully Road bridge and then on to a flattish section before climbing up a slight hill to the site of the former station at Baarmutha.
There's actually nothing left of the station - which was really never more than a halt - the 1905 Bradshaw's shows it as only a request stop

Whatever was there is long gone. All I could see was  a mound beside the bike path next to where it crosses Diffey road with some concrete edging - suggesting that it might have been the site of the platform.
Assuming the mound was the site of the platform, at some point a picnic table has been added to make a stop for cyclists and a sign which is on the 'wrong' side of the old level crossing  to mark the station, and that's about it.
I had a hunt for old photographs of the station but none seem to be available online with the station leaving little or no trace in the historical record.
Still I enjoyed my ride out to nowhere much. The whole ride was a tad under 18km and took me around an hour an quarter. Compared to the rides I would do twenty five years ago it doesn't seem a lot, but then I was twenty five years younger ...
Posted by dgm at 17:58