Despite the fact that  winter seemed to arrive at the end of March, it was only playing with us - we've had a long drawn out autumn with cold mornings and nights, but reasonably warm days, days when you think about getting out on the bike.

But as can be seen from the photograph I tweeted ten or so days ago, we had a late abundance of tomatoes: 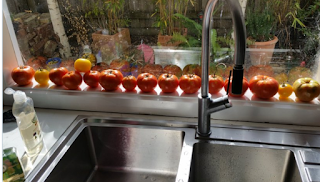 all of which ripened on the kitchen window sill. The yellow ones were a bit boring, but the big red ones were really good tasting tomatoes.

We' ve been eating a lot of tomato and feta salad these last few days, and have finally got close to the tomato even horizon, but even so we still had a problem.

A few days ago we had an almost frost - it didn't quite freeze but it did get down to 0.5C, and the tomato plants didn't like that one bit, which meant a rescue operation to strip the plants of the remaining tomatoes - those that showed signs of ripening went on the kitchen window sill - but the rest ?

Well the rest came to about 5kg, so we selected the biggest and put them to one side to make fried green tomatoes next time we treat ourselves to a big breakfast, and the rest went into chutney.

I think I've probably made enough to feed the street, but for what it's worth here's my recipe

Keen's curry powder is a traditional nineteenth century blend, and a little different from the 'proper' more authentic kinds - if you can't get Keen's, try for a traditional aromatic blend - it doesn't have to be hot, but you need aroma.

Likewise I used Cornwells Malt Vinegar, as it was the only genuine malt vinegar our local supermarket had in stock yesterday - any good malt vinegar will do, but avoid anything that's not been brewed traditionally.

Put the lot in a big pot - the big 3 litre pot we use for pasta is fine. Bring to the boil while stirring to blend together. Once blended and boiling, turn down to a simmer. Stir every ten to fifteen minutes. After about two and half hours you should end up with about a litre to a litre and a half of delicous sticky chutney - the actual quantity will depend on how juicy your original tomatoes were.

Bottle in jars that have previously been sterilised by being put through the dishwasher on the thermo nuclear setting - ours is around 75C, but anything over 60C is fine.

Leave in the cupboard to mature, and enjoy with a decent cheddar and a glass of shiraz ...
Posted by dgm at 15:30