The lives of office chairs ...

We sit on them. We sometimes zoom across open plan offices on them, and sometimes we break them, but the humble office chair is part of our lives 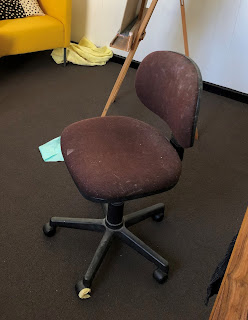 We normally don't think about them, we simply wear them out and throw them away. But the above example is a particularly long lived example - it's about twenty years old. It came from G/169 computer lab at the University of York when it was being refurbished sometime around 2000 or 2001 and the chairs were being replaced as part of the refurbishment.
I took it home to my study in Stamford Bridge, and it travelled with us to Canberra, where it was my study chair and occasional cat bed for about fifteen years 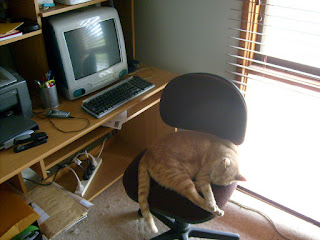 until I eventually treated myself to a new chair.
However, that wasn't the end of it - after some time with my collection of (mostly) working old computers in the garage it came with us to Beechworth and now resides, grubby and battered, in Judi's studio at the Mayday Hills Art Society building in the old Asylum ...