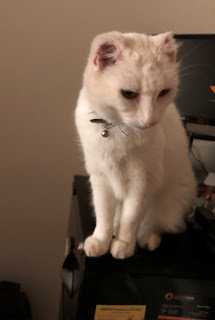 He had been badly mauled a few months ago by what we think was a fox, and when we took him to be treated, they found a small cancerous growth at the base of his right ear.

The growth was inoperable, but we hoped he’d live long enough to spend the summer chasing butterflies and dozing in the sun.

But it was not to be. Over the last two or three weeks the growth began to swell and he was clearly in pain. With no prospect of recovery, we took the heartbreaking and difficult decision to have him put to sleep.

He came to us late in his life as a rescue cat who needed a home. Over his three and a half years with us he became a much loved furry companion who gave us as much in affection as we gave him.

He was an endearing, gentle and affectionate cat and will be sadly missed.