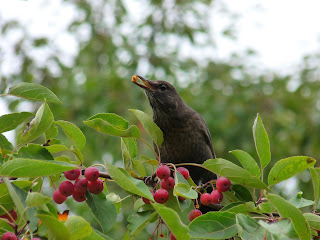 We may still be upset over the death of our cat, but the local population of blackbirds most certainly are not.
Over the last few days they've become more and more blatant, hopping around raiding the loganberries and raspberries.
One can almost imagine the following:

- Have you seen that cat?

Obviously the same sort of thing must have happened when we were away and the cat was in the cat motel, but then, this year's been different and apart from our trip to Port Fairy last month, we've not been anywhere since March, which means there's been a cat around since last autumn.

It's interesting to see however, how the garden birds react to the non presence of a cat, despite the fact that unlike our previous cat who would always chase them, Minty had little or no interest in ornithology.

However, I've both good and bad news for the blackbirds. The bad news is that after a bit of debate we've decided to get ourselves a kitten.

There wasn't any real debate about getting another cat, but we've decided on a kitten rather than a cat that needs rehoming.

We're not exactly sure when as lockdown has reduced the number of cats available - it seems as if everyone has wanted to get themselves a furry friend, and we still need to sort out when, if ever, our aborted trip to South Africa will happen - my guess is 2022  - and we need to do a few family trips to catch up with people.

So, I guess we'll be without a cat until mid 2021, which should give us enough time to socialise and bond with a kitten before going overseas.

The good news (if you're a blackbird that is) is that we've decided to try and raise it to be more of an inside than an outside cat - not totally an inside cat though - we're looking at putting in a cat run so that puss can still have access to fresh air and feel the sun on his fur.

That way we can enjoy the wildlife in our garden, and know that the cat is safe from traffic and foxes ...