Finally got around to taking my old Kuwahara bike out of the toolshed where it's been stored for the last few years to see what sort of state it was in. I'd been thinking for some time I should put it back into use as a daily ride for nipping to the post office, supermarket and so on.

Once I got it out of the shed I gave it a quick look over for any obvious defects. Superficially it looked good, even the front light worked, so I pumped up the tyres and took it for a ride up to the old watertank on Havelock Road 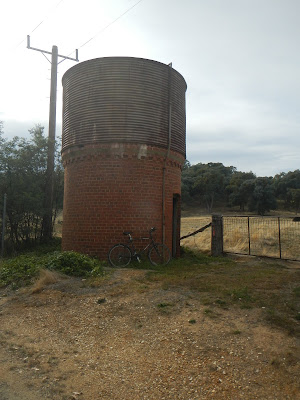 While I'd ridden it around Beechworth a few times while my trail bike was being fixed I'd used it mainly for commuting when I lived in Canberra.
The major damage it seems to have suffered is that the rear gear shifter seems finally to have seized - the front one seized some time ago to be replaced (*ehm* temporarily) by an old cable shift lever. The lack of gears did make it a little like riding a fixie but other than that it rode well, the brakes worked (but it's probably time for new blocks), and amazingly the tyres still held pressure.
So a trip to the bikeshop for a general service and new gear shifters, and I should be right for having a bike for riding round town ...