A trip to Bendigo

J had submitted work to the Bendigo Easter Art show and had all four pastels accepted.

That meant a mad dash to get the works framed and then delivered to Bendigo. We could have used a courier, but were running out of time so we opted to drive to Bendigo - after all it was only three or so hours away.

The drive was fine - the real problem was that when we got to Bendigo the parking was all app based. Fair enough I thought, I’ll download the app.

I’ve always had a bit of a thing about parking apps - they are all different, and end up sucking little bits of money out of your account, but we were in Bendigo for a few days so needs must. (My worst parking app experience was in Pula in Croatia where, having finally managed to download the app, it took one look at my Australian credit card and said 'Ne', leaving us a desperate drive round the city to find a car park that still took good old fashioned money.)

This time, download and installation was  fine except it wanted me to generate a complex password and get it right - not so easy, especially when typing on a little iPhone keyboard. But we got there, paintings were dropped off, and we were off.

As we’d wanted to go to the show preview on Thursday (today was Monday) we’d opted to stay a few days in Bendigo in an AirBnB - actually a nice old house.

Getting in was fun - they’d used one of these real estate agent keybox padlocks  attached to a railing and finding it was fun. Once in it was fine - well apart from the lack of a coffee plunger and slowish internet. (Rather than a wired nbn connection it was a Huawei 4G network box connected to Optus - performance should have been reasonable, but it wasn’t - on the other hand our Huawei portable 4G modem connected via Telstra worked well.)

So off to dinner.

It was a Monday night, so not a lot was open, but we ate at Clogs, a pizza joint started years ago by some Dutch guys.

No, it wasn’t Italian, but the pizzas were well made, generous, the wine list was good, and it was noisy and fun, and a really nice experience. Recommended.

The great thing about staying where we did was that we could walk to restaurants, the less good thing is that the house was on a main road into Bendigo, with the noise of late night trucks.

The next day we made a terrible discovery - we had no way of making decent coffee! Breakfast was instant coffee and sourdough toast.

After that we took ourselves for a drive over to Clunes, via Newstead, where we stopped for lunch at the Dig cafe - a bowl of really chunky pea and ham soup (J) and pea and halloumi fritters (D). From there we set off for Clunes - I’d wanted to go there for some time due to its reputation for second hand book shops. 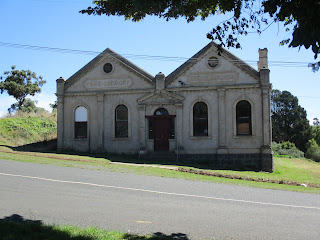 Well, it certainly has a lot of bookshops - I could spend hours in them, but fortunately for our bank balance  being Tuesday, despite it being the week before Easter, they were mostly closed - another time perhaps.

On the way back we stopped at the supermarket in Castlemaine that we’d stocked up in on our Port Fairy trip back in November for something for dinner tonight as we’d decided to eat in, and to pick up a coffee plunger - instant coffee doesn’t really cut it in the morning.

A good organic pasta and a glass or two of pinot noir sealed our evening. We were both tired and opted for some TV rather than something more dynamic.

The following day we decided that we’d have a day looking around Bendigo, so after a leisurely breakfast it was off to the Art Gallery.

Most of the gallery was taken over with a Mary Quant exhibition from the V&A in London.

We decided that at $25 each the exhibition was not really worth it, so contented ourselves with lunch in the gallery cafe and a look at what little of the permanent collection of mostly pre-World War One Australian Art that was on show.

We then walked down the hill to do a little shopping - or rather we didn’t. The main Myer department store was run down and reminiscent of a provincial department store in the GDR is the last days of socialism - uninspiring, tatty and with a poor selection of goods - I’d been looking for a pair of smartish shoes, and I’m still looking.

Walking round the centre of Bendigo it was noticeable just how many stores had closed and how comparatively light the foot traffic was - clearly the lockdowns and restrictions had had their effect, and people had learned the habit of shopping online. Whether they’ll come back is an interesting question - evidence so far suggests perhaps not ...

We wondered whether to eat at home, go out, and then finally decided to go out.

We booked a table, possibly the last table free at a traditional Italian restaurant opposite the art gallery. When I called to book our table was described as being ‘upstairs’ - this actually meant up several flights of stairs through a warren of fridges, kitchens, store areas to a perfectly pleasant little dining area at the top of the building. If it had had a view it would have been wonderful.

It didn’t, but the food made up for it. We both opted for fish and had some beautifully cooked blue grenadier with chunky but nicely cooked vegetables. Absolutely wonderful.

And then it was Thursday, the day of the exhibition preview.

The preview was not until the early evening so we went back to Castlemaine for a few hours, looked in the various second hand shops and bookshops, had lunch followed by a walk round the Botanic gardens, and then back to Bendigo for tea and titivation ...

After making ourselves look presentable, we walked down to the preview, where J inspected the standard of the competition, and I just enjoyed the range of paintings and styles on show.

We had expected drinks and nibbles, but Covid had killed that, so after an hour or so we walked down to a pub in Pall Mall and watched the sunset over the gardens.

We’d originally planned on being very sensible and practical and going back to our AirBnB and packing up in advance of an early start for home the next morning, but instead we went back to Clogs because they were (a) open (b) had a free table and (c) a lot more fun for a pizza and a couple of glasses of wine.

Even so, we were up before the sun the next day, packed up and had checked out by nine ready for a drive home.

Being Good Friday, traffic was light at first, but there were increasing numbers of caravans on the road.

Even so we got to Murchison by 10.30 for a coffee and cake stop at the bakery, and were home before one.

All that remains is a trip back in a few days time to pick up any of J’s artworks that don’t sell ...

as it was none of J's pastels sold, so yesterday we had a maddish dash to Bendigo to reclaim them after the end of the show.

We were on the road by 7.30, stopping at Murchison for a coffee and a comfort stop just after nine,

Geek that I am, I noticed that the toilets in Murchison had sprouted something that looked distinctly like an outdoor public wifi base station - so out with my phone, and there it was, an open public wifi connection provided by Greater Shepperton council.

And the on to Bendigo.

Collecting the pictures was amazingly efficient and straightforward - when you booked in your artworks you received a sheet with barcodes and a jpeg of the picture - collecting was simply a case of rescanning the code and cofirming receipt in good order.

And then back home.

It was too early for lunch in Bendigo, so we went back via Heathcote, where we ate at Fodder, a nice if very busy cafe, and then onto Nagambie.

Here we came unstuck. We meant to work our way via a backroad to the Hume Freeway, but turned left when we should have turned right (actually we turned right, mistakenly thought we'd made a mistake, did a U-turn and started heading through town.

This brought us out onto the highway to Shepperton, where we didn't really want to go, but we spied a sign to Longwood, which we knew was on the Hume.

It looked like a perfectly pleasant rural backroad - until it turned into narrow rutted dirt for about 10km before going back to bitumen.

Once back on the blackstuff it was a quick run into Longwood and out onto the M31 heading north.

A long day, and due to the dirt stretch on the Longwood road, longer than it should have been, but even then we were back by four, which wasn't too bad ...