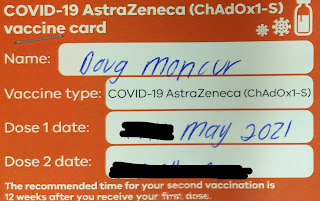 It is a truth universally acknowledged that the Federal government's vaccination roll out has not been an unalloyed success.

The whole idea of having GPs administer the jab hasn't worked well. For example, our GP practice isn't even administering Covid jabs.

J used the federal government's booking system to find another local practice, phoned them up and was told "we're only doing our registered patients but we'll put you on a waiting list" and has heard nothing since.

My own attempts to book via the federal government's booking system have been equally frustrating - being told that injections were available at a practice in Culcairn, a 100km across the border in NSW, was not helpful, nor were the inane emails I got after registering reminding me to book a vaccination.

However, the state government here in Victoria has opened a number of vaccination clinics, including one in the old Coles' supermarket in Wodonga.

Strangely enough you can't book online via the federal government's booking system, you have to call them, but at least it's a 1800 number.

Normally I prefer to do things online than play telephone tag, but I've got to say this was a really good experience.

After going through a couple of layers of menus I ended up talking to a guy who was really clear and helpful, and who booked me in a couple of days later. I was genuinely astounded how simple it was.

Again the help desk guy was really helpful, confirmed that I was in the system, read back my details and added "Don't worry about the confirmation, sometimes the system doesn't process the emails properly".

So off we went to Wodonga to do our weekly supermarket run and then to the clinic. The set up looked like any picture you've seen of a vaccination clinic anywhere - black plastic chairs, plastic injection cubicles,  handwritten signs in magic marker, people to take your details, nurses to administer the injections and a post injection waiting area with a couple of paramedics on standby not to mention a couple of security guys really to keep the check in queues running.

The whole experience was really good. No one likes injections but the whole vaccination system worked really well.

J was so impressed that she asked if they could do her as a walk-in. They couldn't, but they gave her an appointment for when we're next doing our supermarket run.

And after the vaccination?

I felt a little bit spacey and not there afterwards, and my arm hurts a bit and my temperature's up. All normal, and certainly no worse than I've felt after some of the precautionary injections I've had for travel to Laos, northern Thailand, or to the jungle in Borneo.

I can't answer for states other than Victoria, but if you live in Victoria I'd suggest using the DHHS vaccination service - go to https://www.coronavirus.vic.gov.au/book-your-vaccine-appointment to make a booking ...

So, how do I feel a few days after my shot?

The spacy feeling I had after the shot disappeared during the afternoon, and I cooked dinner as normal. I blithely thought I was going to be one of those lucky people who have little or no reaction.

The next day I had some soreness around the injection site, a headache and I felt like the muddleheaded wombat, vague and had difficulty concentrating.

Paracetamol fixed the headache, but later on in the morning I began to have chills and sweats a bit like you sometimes do when you have the flu and your body has difficulty regulating your temperature.

Most of the symptoms were gone by the end of the day, but I did start needing to wee a lot as obviously my body was trying to clear stuff out of my system.

The urination wasn’t excessive, just rather more than usual, but after 24 hours or so everything was back to normal.

And today I feel fine. In fact yesterday I felt fine apart from needing to go to the toilet more than usual and had a day working down in Chiltern on the Dow’s documentation project.

I had the Astra Zeneca vaccine simply because it was the only one on offer as it is the only one that currently we can make here in Australia.

If I’d had a choice I’d have had one of the mRNA based ones purely because there’s some slight evidence that they provide greater protection against some of the newer variants. From friends overseas I understand that the reaction from the Moderna vaccine is no better or worse than the one you get from Astra Zeneca.

All the principal vaccines work well and seem to prevent serious illness – in fact if you ignore western technological arrogance and look at the data you see that the Russian Sputnik-V vaccine which is heterologous – meaning the second shot is different from the first – may provide better overall protection than any of the Western vaccines – but we are only talking about one or two percentage points between any of them so it’s nothing to get stressed about.

As it is, given the mutability of the virus, I wouldn’t be surprised if we all have to have regular shots just as we have with the annual flu shot …