We went to Melbourne ... 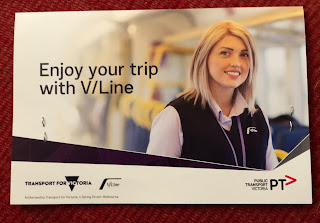 We had more or less given up on the train - slow, often late, and sometimes replaced by a bus at short notice.

Which was a pity, because when we had used it in the past, it was not unpleasant - slow, tedious, but pleasant enough, just not good enough to be relied on if you have a meeting or an appointment at the other end.

Now, if you've been following the dogfood tablet saga, you'll know that J managed to injure herself doing yoga, and we've been spending a lot of time in doctor's waiting rooms and local medical services companies.

The upshot of our various scans and visits is that while the cause of the problem is apparent - a small labral tear - the solution wasn't.

So the suggestion was that we go and see an orthopaedic surgeon who specialises in arthroscopic (keyhole) surgery for an assessment.

Amazingly we got an appointment within the week, so we took it.

This of course caused a problem, we're quite busy people, especially so this week. but we could manage a day trip without staying overnight. As J has injured her hip, we would have been unable to share the driving - it's around a 600km round trip - and I was reluctant to drive the whole journey given it's winter and often bad weather.

So the train seemed to be the answer. A longer day than driving, but overall less tiring.

The train was much the same as ever. We've been promised new Vlocity trains, but Covid has delayed their introduction, so it was still the old coaches and loco combo. 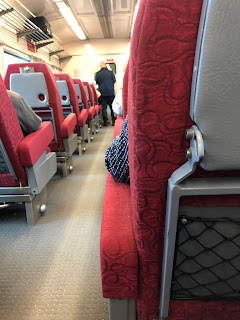 Given J's injury, we went first class rather than economy as you get reclining seats and more space. It wasn't quite as extravagant as it sounds as with our senior card discounts (it pays to be old sometimes) a pair of first class returns was only twenty bucks more than economy.

The night before it rained like buggery and it was still raining heavily when we left, which I felt vindicated our decision to take the train instead of driving.

The train was clean, and if it wasn't for the signs reminding you to social distance and wear a mask throughout the journey, it would have been like pre-covid times.

We had been promised a buffet on the train, but in the event there wasn't. Nothing to do with covid, it was just V/Line being V/line.

First class was only half full, and when I walked into economy in search of the mythical buffet and coffee, economy was just a empty, possibly more so.

Despite stopping for about ten minutes to let us admire a view of a rain swept paddock somewhere outside of Tallarook, the train was more or less on time, and I've got to say if it wasn't for a lack of coffee and having to wear a mask, pretty pleasant.

Coffeeless, we jumped on a Metro train to Flinders Street, from whence we went in search of brunch.

Melbourne was noticeably less busy than in previous times, fewer cafes were open, and those that were were less busy. After brunch we went to the big city department stores in Collins Street and J told me the story (again) of when she worked for a fashion house between school and uni of wheeling racks of finished dresses up laneways to the delivery docks of various stores.

Both DJ's and Myer, the only two stores we actually visited, were pretty empty. I'd almost say more staff than customers, and in DJ's all the momentarily idle staff had clearly been briefed to greet customers and say 'Welcome back'.

Then a Metro train out to Epworth hospital and the consultation, which was a reasonably positive experience with a suggestion of an approach that might avoid surgery.

By the time we'd done all that it was a bit after three and the train home didn't go until six. As it was cold and damp we were a bit at a loss what to do so we went to the NGV for a bit.

V/line have a twitter feed for each of their services and helpfully advised that there was again going to be no buffet car on the Albury evening service - for once my twitter obsession had a purpose.

This gave us a problem. Previously it had been quite easy to pick up something reasonable to eat on the train back from one of the takeaway food franchises in Southern Cross station, but, when we got in this morning we'd noticed that a lot of the food outlets - mostly those that do interesting food like sushi, panini and baguettes had gone - leaving only the usual suspects.

So, instant decision, back to Collins Street on the tram and then walk back through the laneways between Collins Street and Flinders street in the hope of finding somewhere for a glass of wine and something to eat.

Despite it being a little before five, a lot of the cafes one might have expected to be open were closed or closing up. Fortunately Cafe Andiamo, where we'd had brunch (it had been meant to be an early lunch, never mind) was open and had tables free, so it was a mushroom pizza (D) and positano style squid (J) and a couple of glasses of wine. Possibly not the best we could have done, but enough to give us that 'Aah' moment before the journey home.

The journey home was tedious.

The train was running late, and it was dark - in fact it revealed that just how extraordinarily dark the Victorian countryside is outside of townships, many of which fairly minimal street lighting.

I'd brought a book to read, but that didn't work as my glasses kept steaming up due to the requirement to wear a mask, so we played with our phones, talked, and played 'I spy with my little eye' among other silly games.

There's no wifi on our current crop of V/Line trains, but one thing I did notice was that on most of the line there's now pretty good Telstra coverage meaning that if we'd actually wanted to use the internet we could have taken our portable internet modem with us.

The train was even emptier than it was on the way down, perhaps a bare third of the seats taken.

We arrived into Wangaratta about twenty minutes late. While there's a connecting bus to Beechworth, we'd driven down to the station and left the car in the station car park for the day, meaning it was only a half hour drive home for a glass of something and some nibbles before bed.

So, how would I rate the experience?

Tiring, in a word.

The precautions against the spread of covid are inevitably irksome, but they are well enforced, and everyone seems to understand the importance of social distancing, mask wearing and hand sanitiser. The trains, and the stations, are clean, in fact cleaner than they used to be.

I'd have no worries about using the train again, but if it was possible, I'd go down the day before on the lunchtime train, take an overnight bag, and stay somewhere in the city rather than do the whole journey in a single day ...