Gardening and a little research

Well, regional Victoria came out of lockdown on Friday, meaning that hopefully I'll get a day's documentation work in at Dow's next week.

In the meantime, I've been plugging away planting seeds and potting up plants, but it's not been all gardening.

While I was working in the garden earlier this week I turned over a little bit of glass: 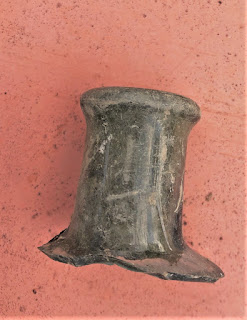 having documented quite a few intact nineteenth century bottles at Dow's I'm reasonably happy with the dating.
Talking about dating bottles I'm also happy that I've finally run the reason for there being a Wm Docker bottle among the old bottles at Dow's. I'll leave you to read the post but in summary, I'm now hypothesising that the bottle originally held straw hat varnish rather than linseed oil as I previously thought.
I must admit I had quite a bit of fun with this - after all varnishing straw hats is a lost art but clearly this was something people did to make the hats last.

Marcus Clarke in a cabbage tree hat - public domain image from wikipedia
In the nineteenth century, locally made hats - called cabbage tree hats after the cabbage tree palm they were made from - were in common use, and obviously people needed to make them weatherproof - hence the development of hat varnish.
Fascinating how a simple bottle can give one a glimpse into a lost world, and perhaps an original excuse - "Not tonight darling, I'm varnishing my hat ..."
Posted by dgm at 14:54