A geeky walk in Brighton

After my trip out to St Kilda cemetery, I did something geeky.

I didn't mean to, but that's how it turned out. As the train went through Middle Brighton station I'd noticed a sign for a walking route to the Brighton Beach boxes - huts that people have as beach huts on Brighton Beach. 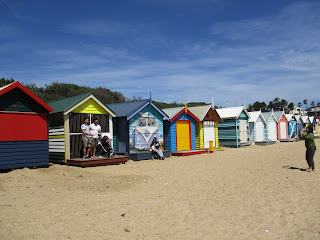 Very photogenic, and most definitely a local attraction as some of them have some quite funky paint jobs 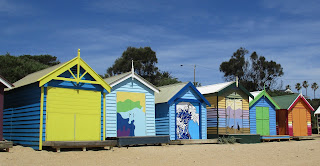 The walk wasn't quite as simple as I thought, as all the signage disappeared at a critical point, but as I could just see the Bay at the end of one of the streets, not all was lost. I headed down to the Bay, and hey presto there were the huts !
So, I walked along the rather blowy beach and then up on the esplanade. Rather than walk back to Middle Brighton I decided to walk on to the next station, Brighton Beach.
This is where things became geeky, along the way I came across an 1861 68 pounder canon in a park 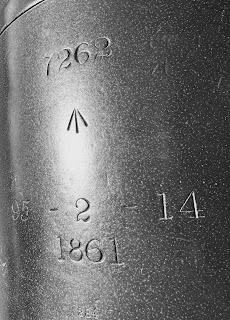 I'm guessing its origin lies in an outburst of post Crimean war paranoia about Russian expansion in the Pacific, something that wasn't helped by the Confederate commerce raider Shenandoah putting in to Melbourne for repairs in January 1865 - if the Confederacy could do it, the Russians certainly could.
The canon itself is a fairly boring bit of Victorian armament, and now mounted unglamourously on a concrete plinth - there's no VR crest, unlike some other bits of Victorian weaponry scattered along the coast, just a war department broad arrow, asset number and a date.
From there I walked on to Brighton Beach station. Like a lot of nineteenth century railway stations Victoria, it looks as if it had been copied from a British original of the same period, albeit with a corrugated iron canopy and roof in place of the British tile or slate roof.
However I noticed one interesting little variation on the station building

- there's a row of patterned tiles beneath the eaves of the station building - something I havn't noticed on other stations on the Sandringham line. It could be that this extra flourish is because, until the 1880's, the line only went as far as Brighton Beach and the station was originally a terminus - something reflected in the rather impressive station building 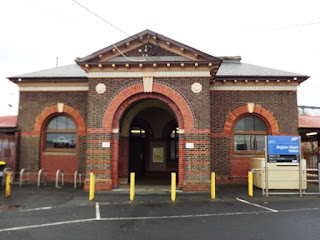