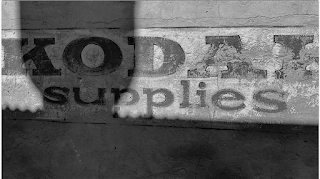 A couple of weeks ago I posted the photograph above of a ghost sign on a wall in Chiltern.

As is rather obvious it's got a shadow. Not of me, but of something else.

So yesterday, which was cold and overcast I went back and retook the image - on my phone, just as before

So what was causing the shadow?

A bloody stop sign at the intersection behind me. Low winter sunlight did the rest.

How much of the shadow was an artefact caused by my phone and how much was due to my being a total dill and not noticing is up for debate, but nevertheless I simply didn't notice the shadow first time around when taking the picture.

As part of my retro photography experiment I plan to retake this and some other ghost signs in Chiltern, something obviously that needs to happen on a chilly overcast day ...