A pleasant afternoon out

So, when today dawned bright and clear we decided to have a day out. Normally Wednesday is my documentation day down at Dows but I've postponed it to tomorrow.

Instead we drove over to Rutherglen where we had lunch in Valentine's Bakehouse, and then on to Carlyle Cemetery just outside Rutherglen.

Once in goldrush times it must have been a bustling sort of place, but now it's a slightly forlorn place in a paddock on the banks of the Murray.

My main interest was the Chinese cremation towers, brick built, but slightly different in style in the ones in Beechworth Cemetery 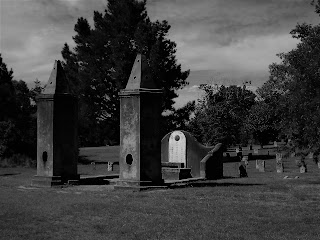 These, and the graves that the Chinese miners left behind serve as a reminder as to just how extensive the Chinese presence was in the goldfields.
I'd originally planned to photograph the Carlyle cemetery as part of my stalled retro photography project, but the weather has been so bad this winter I decided to shoot on digital as I wanted to capture some images while the weather was decent.
After our bit of cemetery browsing, we drove on to Campbells winery to pick up some decent bottles of wine and then as drive along the banks of the Murray and then home.
It doesn't sound like much, but bad weather, the flu, and latterly bone chilling cold - today was the first time in days the afternoon temperature reached double figures - have kept us indoors for most of this winter, almost as if we were still in lockdown ...