We've been on a cruise

Well that's a sentence I never thought I'd write!

To me the idea of a cruise always brought to mind these floating gin palaces with onboard casinos, discos and for all I know, a resident troupe of naked acrobats. And most definitely not something we'd ever do.

No, not one of these. This was a Coral Expeditions cruise to the Kimberley, with a small ship and frequent landings at sites of cultural, historical or scientific significance which are quite frankly, almost impossible to get to by any other means. 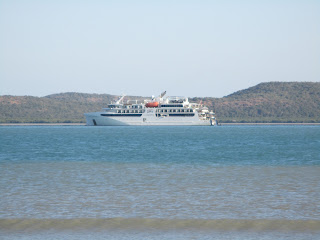 And it wasn't all a floating research seminar, there were some fun bits as well like being banged about in Zodiac going through the Horizontal Falls.

Now, as we know, the times are not what they were, and given that Covid is now endemic, and small isolated group in close proximity risks an outbreak. As they say, it only takes one.

Coral handled this quite well, advising passengers to carry out frequent self tests in the fortnight before departure - we went a little further than this and self isolated as much as possible and masked up as there seemed to be an Omicron out break locally. The day before departure we had to do a self test and upload a picture of the test results, followed by a nerve wracking final RAT under supervision before being allowed to board - while RATs are not a 100%, do enough of them it's a pretty good indicator that you are covid free - there always being a worry about people who are either asymptomatic or nearly so.

The whole multiple RAT scenario was a bit stressful as we had first to fly to Darwin from Melbourne. I'd booked a direct flight with Qantas who promptly cancelled the flight and rerouted us via Adelaide.

The flight to Adelaide was full and we cowered in our N95 masks. Qantas had decided to provide breakfast - a slimy egg and ham roll which we declined on the grounds it was (a) disgusting (b) we wanted to stay masked.

We had to wait for a couple of hours in Adelaide airport for our connecting flight to Darwin. This wasn't a Qantas flight, but one operated by one of their regional sub contractors, Alliance Airways, which was slow.

They did feed us - a microwaved something consisting of sloppy mince and potato chunks with an orange cheese topping - only the presence of the odd kidney bean suggested that it was supposed to be a chili of some sort - totally tasteless.

Before I retired I always used to set my preferences to 'vegetarian' with Qantas - the food wasn't any better but at least that way you avoided in flight meals that looked and tasted like lightly boiled dog - in fact when I was working I preferred Virgin to Qantas because the food was fractionally better and they treated you like an adult.

Virgin, of course nearly went under during the pandemic and have returned to their low cost roots. I've no idea what they are like to fly with now.

Anyway, despite a long and tedious flight on Air Magimix we got there and more importantly, out bags did too.

No one really much was wearing masks in Darwin, so we continued to self isolate, which was hard as our hotel room had a pool view, and the weather was warm and the water inviting.

We did have a walk around the centre of Darwin - somewhere where I hadn't been to since 2005. Not much seemed to have changed from how I remembered it - it was still a laid back 'Not Today, Not Tomorrow, Not Tuesday, Not Thursday' sort of place.

And then, having passed our compulsory RAT we were on the boat.

I'm not going to detail the experience - everything worked, we saw some great indigenous rock art, a lot of birdlife,  quite a few crocs, some quite fantastic geology, and as a bonus several whales out at sea. It promised much and delivered more. 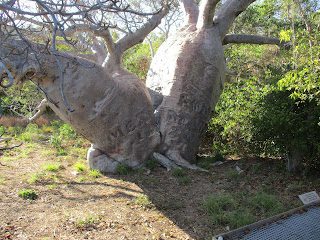 One of the side effects of going to such a remote area was that we dropped off the internet for nearly 10 days. The ship did have satellite internet but it was slow, expensive and erratic so we did without. Only when we passed a remote mining camp would our phones burst into life and download a scad of emails, and even then sometimes only the headers - any app that was dependent on a good 4G connection didn't work.

It was good having a detox, and despite spending most of my life being jacked into the internet I didn't miss not having it, time to read, time to write in my journal, etc.

The cruise finished in Broome in WA, and we took the opportunity to have a couple of days there.

Broome had been hit hard by the pandemic - as a tourist town its main source of income had gone, as had the backpackers who washed glasses and served meals - several restaurants had closed as had some of the shops, which made eating out a challenge, but Cable Beach was still there and our hotel had a decent pool so we had a little bit of gentle downtime before the flight back. 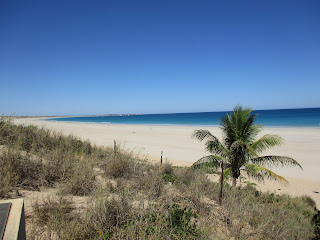 Again this was with Qantas, and this time they consented to run the direct flight (one a day) back to Melbourne rather than give us the great tour of Australian airports.

The flight was full, and despite being asked to, some people didn't wear masks. The catering was just as appalling on the flight to Darwin with the dread 'Chili concarn' again being on the menu. There was another option but we never saw it as they only seemed to have three serves of that available.

They also said they had no booze but J noticed a tray of green cans in the drinks trolley that looked suspiciously like James Squire pale ale, and asked ingenuously what they were, something which got us a can each.

However, both us and our bags got to Melbourne, which was the main thing and we don't (touch wood) seem to have picked anything up from the flight.

So, would we do it again?

Emphatically, yes. We had a great time despite the hassles of flying and the stress induced by having to have multiple RATs along the way, and even though I'm happy to be rude about Qantas's fairly appalling performance despite our paying out for full price tickets, they were trying to provide a service, even if it wasn't up to their pre-Covid standard.

Given the daily horror stories about lost bags and cancelled flights I think we got off lightly.

Hopefully by the time we come to use our international flight credit next year they'll be a bit more together ...