It's been a strange week weatherwise.

For a time it looked as if the rainy weather pattern we've been having had finally broken with a few warm sunny days - one day it was even warm enough to wear shorts (!) - meaning I finally managed to get the grass cut -  which was up to the cats' navels; plus a decent amount of weeding to tidy and neaten up the garden.

The slugs and snails took advantage of the warm weather to seriously munch my zucchini and tomato plants and I had to resort to slug pellets - organic environmentally sensitive ones of course - which seem to have done the trick.

Despite their battering from the rain the broad beans seem to be podding, so maybe we'll get some fresh beans after all.

I had a days documentation down in Chiltern, working on some bottles I initially took to be nineteenth century - some of them labelled F. Lane - the owner of the pharmacy around the turn of the twentieth century 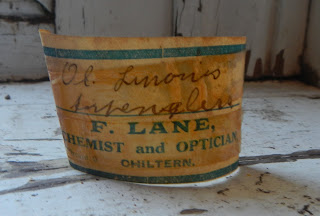 and another from R. Hughes, a chemist in Wangaratta around the same time 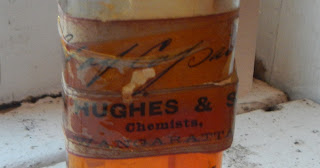 so I was quietly confident that the material I was working on dated from the Edwardian era.
Except, no.
A lot of the bottles came from Rocke Tompsitt, a major Melbourne wholesaler. The labels were all very simple letterpress labels similar to this 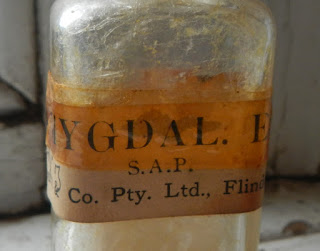 which I'd kind of assumed to be from the Victorian period.
But no. I found evidence that the same basic design was in use until the 1940's, which changes my view as to how old the contents of the pharmacy are.
Some material is definitely nineteenth century, but the use of the old style labels as late as 1940 suggests that some of the material may be newer than initially suspected.
Besides that, this week I killed my Pinterest account, felt crochety about Windows 11 (incidentally, despite the heavens opening last night, I managed to get my first bike ride of the summer in this morning), and pontificated about an early fifteenth century English gold coin found in Newfoundland, and wrote a little thing about Nellie Bly.
And given the uncertainty over twitter, I've joined the mass migration to Mastodon.
I've not quite got my head around Mastodon, but it's not like twitter. Just now it seems to consist of people saying 'Hi, I've moved', so for the moment it's wait and see ...
Posted by dgm at 15:20