When our old cat died just before Christmas last year, we decided that we would get a kitten.

Since she was a little girl Judi had always wanted a Siamese or Tonkinese cat, and, after a lot of to and froing, we managed to track down a local breeder, and that was how we ended up with Oscar a couple of months ago.

When we were picking up Oscar, we were chatting to the breeder, and we explained that this was the first time we'd had a pedigree kitten as all our previous cats had either been rescue cats, or cats in need of rehoming.

The upshot was that the breeder said that Lucy, who had been Oscar's foster mum - his own mum had got a nasty infection after giving birth and couldn't look after her kittens - and Oscar had been given to Lucy who had only had a very small litter, and Lucy was due to be retired and did we want to take her?

We said yes, and we should have been able to pick Lucy up a couple of weeks after she had been neutered.

Well, even though the breeder is only ten km inside NSW, covid lockdowns and restrictions on interstate travel meant that Lucy was spayed later than intended and we couldn't pick her up until yesterday.

(Incidentally, China, Oscar's real mum, has made a full recovery, and has had another litter and is now about to be retired.)

Less than ideal, as we were worried they might have forgotten each other, and certainly las night there was a lot of yowling, hissing and cat whacking, but when I woke up this morning there seemed to be an unusually large cat lump on the bed, and there were two cats cuddled up together. 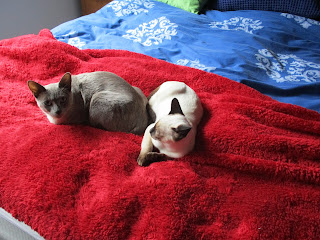 They've since moved to the bed in the spare room and seem to be getting on well enough even if Lucy is still a little wary of being in a strange house with an annoying kitten ...